In Garfield County, Utah, one ice fishing trip at Panguitch Lake ended up with quite a different catch on the line. Instead of catching some dinner, Bransen Jackson walked back to his car a hero. The fisherman had spotted a fawn stuck inside the ice of the frozen lake. Thankfully, one of his buddies was there to catch the entire rescue on video. Apparently, neither man could even identify the worried animal at first.

His friend asked Jackson what was on the ice, to which Jackson responded "I looked over there and squinted, [and said] 'Dude, that’s a deer!' We gotta go save it of course!"

The duo went to investigate and sure enough, there was a scared fawn in the water. Jackson identified it as a fawn mule deer, and it looked to be about one year old.

"We slowly just started making our way over there," he recalled, "at one point his boot actually went through a crack in the ice. So it was really thin, but I was like ‘we can’t just let this deer sit there.'" 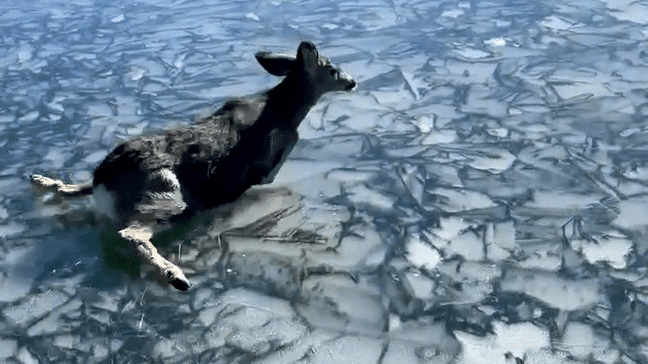 As soon as the two were back on solid ground, the deer sprinted off into the forest. Although Jackson has had many memories in the woods as a wildland firefighter and hunting guide, this is surely one experience he'll never foget.