Lawyer Assures Virtual Courtroom: 'I Am Not a Cat!'

A virtual courtroom hearing had an unexpected guest during a mundane civil forfeiture in southwest Texas on Tuesday. During the hearing, one of the attorneys accidentally changed their on-screen appearance to resemble a computer-filter-generated cat. Presidio County Attorney Rod Ponton arrived in Zoom court looking like his face was superimposed onto that of a fluffy brown and white cat. He spent about a minute trying to remove the filter, but was having no such luck...

With other lawyers on screen giggling and smiling, 394th Judicial District Court Judge Roy Ferguson tried to coax Ponton through the steps to remove the filter. Unfortunately, that was not in the cards for Ponton. the attorney eventually gave up and resigned himself to the feline form.

"I'm prepared to go forward with it. I'm here live, I'm not a cat," Ponton said. To be fair, he most likely had not transformed into a cat...but who knows. 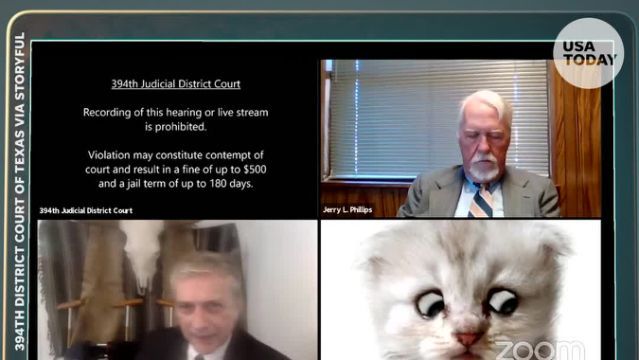 "If a child used your computer before you join a virtual hearing check the Zoom Video Options to be sure filters are off," Ferguson comically sent out via Twitter. "This kitten just made a formal announcement on a case in the 394th."

Apparently, the issue had come when the attorney used his secretary's laptop instead of his own due to technical issues. Ponton later laughed it off and told NBC that he was happy he could brighten some days during such a dark time.

"If I could make everyone laugh at my expense I'm happy to do that," Ponton said in an interview with NBC News. "It's an example of what can happen in our computer connected world."