Giraffes Saved From Flood Thanks To Community Built Raft

On a shrinking island in the middle of a flooding lake, eight endangered giraffes were circled by increasing danger. Crocodiles were infesting the waters around them, but the community was not about to let the animals suffer in peril. Conservationists, government officials, and locals of the Ruko Community Wildlife Conservancy in Kenya joined forces to create a raft large enough to save the endangered giraffes. Only 1,600 remain in the wild. 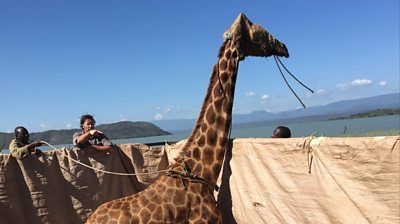 "The barge floats atop a series of empty drums, for buoyancy. Reinforced sides kept Asiwa from jumping out as the barge was gently maneuvered by boats,” explained David O’Connor, President of Save Giraffes Now. The organization is a non-profit that assisted with the dramatic rescue. Without the help, these rare giraffes would have likely perished from the flooding.

The giraffes were all relocated to an extraordinary 4,400-acre reservation. The high, secure fencing should be impressive enough to keep the animals safe from predators, poachers, and even flooding. Known as Ruko Community Wildlife Conservancy sanctuary, the animals will be well cared for going forward. Their head might be in the clouds, but these animals are officially well grounded.