Quarantine is affecting everyone's household differently, even celebrities. Chris Evans recently shared a hilarious photo of his dog after attempting to give him a haircut. Since most dog groomers have shut down during the virus outbreak, it seems that people are trying to groom their dogs themselves. The pooch is seen in the photo with patchy fur of various lengths.

I assured him I knew what I was doing. He seemed skeptical at first, but with the help of a few treats, I talked him into it.

It went so wrong, so fast. I guess some things are better left to the professionals.

(He hasn’t seen a mirror yet. I told him it looks great) pic.twitter.com/uooHwtmgH3

"I assured him I knew what I was doing," wrote Evans on Instagram, "He seemed skeptical at first, but with the help of a few treats, I talked him into it." The photo was shared on both his personal Twitter account and his newly created Instagram page. His dog, Dodger, seemed unaware of his new appearance. "It went so wrong, so fast. I guess some things are better left to the professionals," Evans continued. 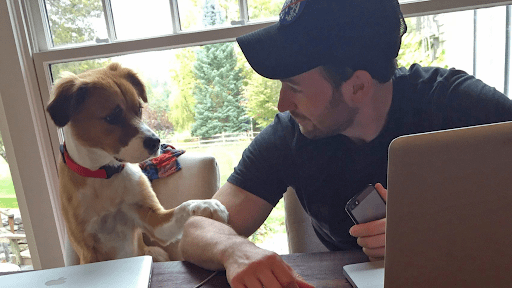 "He hasn't seen a mirror yet," said Evans, "I told him he looks great." Evans adopted the dog on the set of the film Gifted, where he shot a scene in a dog shelter. He asked if the dogs were really up for adoption, and upon realizing that they were, he knew he has to take home his new best friend. "I was walking up and down the aisles and saw this one dude and he didn’t belong there," said the actor.

This is the moment we met. He was trying so hard to stay seated even though he desperately wanted to get out. I knew right away that he was coming home with me, so I took this video to always remember our first hello. Rescue dogs are the best dogs!! #NationalPetDay pic.twitter.com/XjWxPWGDPu

The actor and his puppy have been inseparable since they met in 2017. He frequently posts videos, pictures, and updates about life with his favorite furry friend. Hopefully, though, he can let the fur grow out and get it professionally cut next time. For his sake, and for Dodgers...